Message from the Blessed Virgin Mary

To Her Beloved Daughter Luz De María. on the Feast of Our Lady of Fatima. 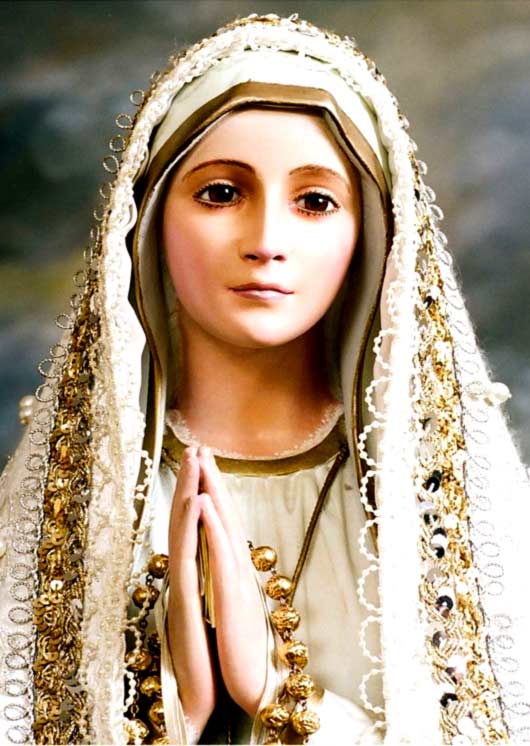 TOGETHER WITH MY HEART ON THIS SPECIAL DAY, RAISE YOUR VOICE AND ASK THE HOLY SPIRIT

TO RECEIVE THIS REQUEST OF MNE so that each personal consecration that you renew this day to My Immaculate Heart, raises your consciousness and understanding so that you discern the instant in which you live and fully grasp the depth of this Call of Mine.

I ASSURE THOSE WHO CONSECRATE THEMSELVES CONSCIOUS OF WHAT THEY PROMISE, THAT THEY WILL BE GUARDED BY ME so they are not lost, if they persevere in faith.

MY CALL AT FATIMA IS FOR ALL OF HUMANITY, for all men, women, young people and children of this generation. It is not for a determined sector but for humanity in general who must awaken, become conscious and change the path of the events, before it is too late.

WITH LABOR PAINS I PRONOUNCED AN URGENT CALL IN SEARCH OF WORLD PEACE; I called you to join forces so that you do not destroy one another, thus avoiding the Third World War, which as you can note, with the weapons the great powers possess, can destroy in very little time three fourths of humanity. This is not fantasy but a harsh reality.

I left this generation My Love, with a total message of warning, of change and a new dawn for humanity, but I was silenced, My Secret broken up and still not made known in its entirety.

PAINS IN WHICH THERE WILL BE TOTAL PURIFICATION, BUT IT IS AN ENCOURAGING ANNOUNCEMENT FOR THOSE WHO WELCOME MY CALL AND CHANGE THE DIRECTION OF THEIR

ACTIONS, raising their voice so that the powers cease the creation of lethal weapons with which, in instants, will bring the greatest of pains to all of humanity, to the Earth and will annihilate Nature, the work of the Hand of God.

I WARNED YOU ABOUT THE THIRD WORLD WAR: if man did not change, if you did not turn to My Son, war would be a punishment due to the sin with which humanity has given itself over into the clutches of the devil, who will lead humanity to commit the most atrocious crimes and wickedness will reign everywhere.

Hunger will spread like the wind, THE INNOCENTS WILL BE TAKEN BY THEIR TRAVELING

COMPANIONS WHO HAVE REMAINED PRESENT ACROSS HUMAN HISTORY, AND ONCE AGAIN, THOSE WHO LIVE IN THE DIVINE WILL, shall intervene for the good of those who suffer the consequences of man’s ruthless science.

MY FAITHFUL CHILDREN WILL AGAIN BE PERSECUTED AND CHURCHES WILL BE CLOSED, MASONRY

WHICH HE WILL HAVE BEEN EXPELLED. The blood of the just will wipe clean the sin of the wicked.

THE CONSECRATION OF RUSSIA TO MY IMMACULATE HEART WAS NOT CARRIED OUT AS I ASKED: the Vicar of Rome united with the bishops of the world and all the believers at the same time and in unity. Russia, loved by Me, will spread its errors throughout the world and there will be lament when it is too late.

MY PRIESTS SONS, SUNKEN IN THE SETBACKS OF SOCIETY, WILL DEDICATE THEMSELVES TO ENGAGE

WITH THEIR COMMUNITIES WITHOUT CARRYING SPIRITUALITY BEFORE THEM, JUST SOCIALIZATION. The houses of formation of My beloved Priests will be invaded by modernisms, distorting true mysticism and the spirituality with which they must lead.

THE GREAT IMPOSTOR WILL TAKE MY SON’S THRONE, AND THE MAJORITY WILL LOOK AT HIM PLEASED.

THE LITURGY WILL BE SATURATED WITH MODERNISMS that will offend the thrice Holy Heart of My Son…, and I will be banished.

Humanity is in grave danger, COMMUNISM HAS CHANGED ITS FACETS, IT HAS MADE AGREEMENTS WITH SECTS THAT REMAIN WITHIN MY SON’S VERY CHURCH, undermining the power of My Vicars, to the point of making one of them flee amidst the cadavers of his faithful cardinals and bishops, the Church having suffered its most grave apostasy before the earthly power that will usurp the Throne of Peter on Earth.

THOSE OF MY CHILDREN WHO REMAIN PROTECTED UNDER MY PROTECTION AND

MAINTAIN FAITH IN THE PROMISE OF SALVATION GIVEN BY ME TO THOSE WHO LIVE IN FIDELITY,

WILL BE THE ONES WHO IN THE MIDST OF THE POWER COME DOWN FROM ON HIGH,

WILL ACCOMPANY MY SON IN HIS SECOND COMING, THEY WILL BE THE HOLY REMNANT,

WHO GATHERED UNDER THE GREAT SHEPHERD, WILL SEE WITH JOY AMONG ACCLAMATIONS, THE FINAL TRIUMPH OF THE TRUE CHURCH.

I do not forsake My Children, I warn them. My Heart bleeds before the silence kept by those who have not revealed the entirety of My Call at Fatima with which could have been avoided the pain for My children.

Return to this Mother, I suffer for you; I do not want you to be lost, or to suffer at the hands of the devil and his followers. You have already been invaded by several antichrists; do not cling to what will lead you to hell.

BREAKING UP THE THIRD MESSAGE OF FATIMA HAS BEEN THE GRAVE ERROR: A DISOBEDIENCE THAT INFALLIBLY GENERATED THIS BLEAK INSTANT OF THIS GENERATION.

As a Mother, I receive the demonstrations of My children with love, My children whom I carry in My Heart and for whom I gave and give these Secrets and for whom I continued and continue traversing the world and carrying from one land to another this My Message so that you are not lost.

INTO THE HANDS OF THE HIERARCHY OF MY SON’S CHURCH, OF WHOM I AM PROTECTOR AND MOTHER, I ENTRUST THE REMAINDER OF MY DISTRESSING CALL.

I bless My children, I bless their families and invite them to look on high. From Heaven the Warning will come and from Heaven Blessing and Truth will come.